The main political uncertainty in the U.S. is the presidential election, scheduled for the 3rd November. Also, the apparent difference between the political programs encouraged by the Republicans and the Democrats is incredible.

Democratic contestant Joe Biden has been maintaining the leading position in the polls for a few months ago, however, his lead diminished recently. Therefore, President Donald Trump, a Republican, will try to win this election.

Nevertheless, whatever the outcome, it could be a subject of debate over many weeks, especially if the conquest is slim. As we wait for the political frictions to subsidise, the result may have implications for monetary markets especially the investment sector. Due to the present market insecurities, the most sensible thing to do is minimize equity exhibition as a precautionary measure.

Trump VS Biden in November

The U.S. election will start in less than 100 days. However, the coronavirus pandemic has made plenty aspects of the race ambiguous.

The Republican and Democratic conventions are not the usual norms.  Besides, the two parties avoid the regular rally filled with thousands of supporters, party officials, and reporters worldwide.

However, it’s not yet how Election Day will be, because of the risk of getting affected with Corona virus if in person voting is required.

Furthermore, a certain number of people are expected to vote via postal votes before 3rd November. As a result, election specialists propose that election results may not be released on election night. But, it may take several days or weeks to come out.

Albeit, the 2020 election is likely to make a great impact on people’s way of life, even up till autumn If this should be the case, then the upcoming US election would turn  out to be one of the most unusual U.S. Presidential election in history.

Despite the uncertainties, a few aspects of the election processes are contained in the U.S. constitution.

Below is information on what is happening currently and could potentially happen during the election:

The United States will be conducting its election on the 3rd day of November but there have been hints that it would not take place then. One of these was from a tweet by Donald Trump where he said that “the rule modifications which allow voters to use postal ballots in many states, could result in a rigged election”. He also went further to claim that through postal voting, people could get deceived but election experts show some disbelief to this. On their part, they explained that if postal voting increases, then some issues could arise.

On the other hand; there could be a postponement since the Constitution does not contain the election date. Nevertheless, you can find the date for the inauguration of the newly-elected president in the constitution but it is rare for one to postpone the election. This will happen if only the Senate and the House come to an agreement for the postponement to take place. Still, if they postpone the election, there could be a disruption of the economy.

At the Republican National Convention where President Donald Trump made an appearance, he told the press that this is the most remarkable political trick since time memorial and they would be dispensing about 80 million ballots for the election. On the 30th of July, he made a tweet where he mentioned the problem hinting that the United States should extend the election till when they can open the polls with the complete eradication of the coronavirus pandemic. Even though they do not postpone the election, the political chaos that will follow might destabilize the U.S. economy.

How The Delayed Election Could Affect The U.S. Economy

If there is a delay in the election outcome, the U.S. economy which is already weak might become more clouded. Mauro Guillen, a political columnist, said, “When we see uncertainty go up, we see that economic actors, inclusive of investors, stop making decisions. And which has devastating consequences.” The shocking feature would be so big that he thinks market and the economic decision-makers would be so shocked. The assumption is that, a situation when there would be some chaos in the market and the economy would come.

How Else Has Coronavirus Affected the Election Campaign Cycle?

The Republican and Democratic political assemblies which are a reoccurrence of presidential election years currently have new degrees of doubt attached to them. Joe Biden and his running mate, Kamala Harris, firmly opposed the travel to Wisconsin to receive the Democratic presidential nomination due to the problems of the coronavirus pandemic.

What this means is that the Democratic convention; which is usually a big superfluous event used to improve  party feeling and grant proper media exposure to the presidential candidate will be entirely an online event. 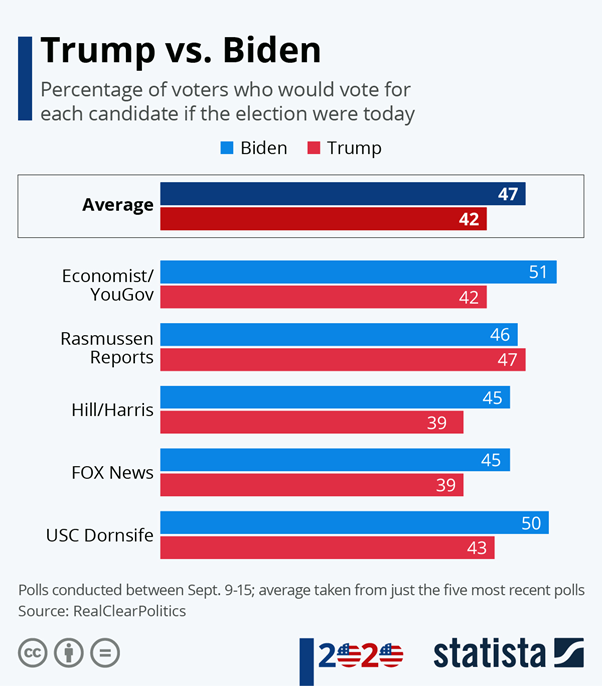 September polls between President Donald Trump and Democratic nominee Joe Biden implies that the former seems to be leading. Nonetheless, a tiny gap combined with the first poll to give Trump an advantage as there is a heated race currently with two months remaining before the date of the election.

Main polling managements show that Biden towers above Trump with a 5% standard lead in the conventional election. A poll from YouGov and the Economist points out a 9-point lead which is advantageous for Biden, whereas a Rasmussen ballot hints a tiny lead by 1-point for the present president, Trump.

Sanction evaluations for Trump have remained inactive over the past month. The decrease began when the citizens held a protest for “Black Lives Matter” protests George Floyd was assassinated sometime in May. It began to climb slightly when the coronavirus pandemic gradually saw eradication from U.S. soil and stayed at its level despite when Trump declared that Kamala Harris will stand as his running mate. Multiple polls round the country showed that Americans are in support of his choice of running mate.

With the opening of schools and businesses in the United States, more cases of the COVID-19 pandemic are appearing. Still, there are ongoing preparations for the election. For instance, Biden has begun to increase campaign adverts and digitally addresses the citizens constantly. On the other hand, Trump has continued to hold press conferences where he throws light on various topics.

With the U.S. presidential election two months away, Joe Biden who was the former vice-president and the current nominee for the Democratic Party leads incumbent Republican President Donald Trump in polls. Unfortunately, this summer has not been quite favorable to him as his polls drop in some cities.

Nevertheless, you should note that the president can influence the market and economy, if he or she is capable of enacting the legislation. To be able to install more contentious policies, taking control of both the Senate and House of Representatives is crucial and it might be quite difficult to do this. In a tougher demonstration for the Republicans, they could win the election in November and take control of the White House.

The probability that the Democrats will win back the Senate looks slim as just 35 out of the 100 Senate members accept re-election this year. If the present state of political affairs remains adamant, it may assist stand-in investors to realize that it could heavily restrain some of the excessive fundamental proposals for both sides.

A press interview explains that from viewing both parties and how far they have gone in the struggle for the presidency, no one is certain yet of a winner, but if there would be one, it seems to be the vice-president.

Oil supply concerns were reduced this morning, pushing the index higher. Positive US data has eased recession fears among investors. Crude oil inventory data from the US could move the index later in the day. Bulls could push prices to 13000 in the charts. The Nasdaq 100 index (NQ) futures closed lower on Wednesday, as Read More…

Rising Oil Prices – Here’s What To Look Out For

Over the last few months, rising oil prices have many market participants’ attention. The chart below shows the price of oil, which peaked at the end of October 2021 and then fell about 25%. It bottomed in early December 2021 and hasn’t looked back. Oil broke through the Oct 2021 high of $85 a barrel Read More…

Digital Currencies And The Future Of Money

Blockchain-based digital currencies could revolutionize the financial industry. Cryptocurrencies like bitcoin reverse the traditional modes of transactions between individuals and organizations.  If adopted as an alternative to fiat, they can reduce transaction costs and eliminate the need for intermediaries. This will in turn minimize counterparty risks and stabilize the price. A digital fiat like the Read More…