What is the Engulfing Candlestick Pattern?

A bullish engulfing candlestick pattern is a bullish reversal candlestick pattern. That means when it forms, there’s a high possibility that the current downtrend will reverse into an uptrend. It’s usually formed towards the end of a bearish trend, with a relatively smaller bearish (red) candle preceding a larger bullish candle (green), which completely covers it.

Here’s how to identify a bullish engulfing candlestick pattern:

It provides the best signal for a bearish reversal when it forms toward the end of an uptrend, indicating the onset of bears in the market. The bearish engulfing pattern consists of a relatively smaller bullish (green) candle preceding a larger bearish candle (red), which completely covers it.

Here’s how to identify a bearish engulfing candlestick pattern: 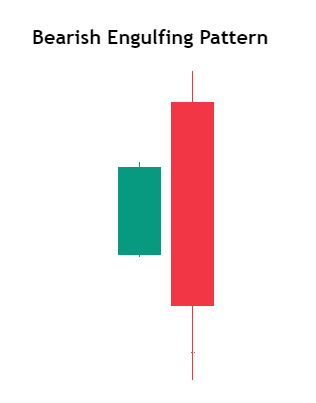 How to Trade the Engulfing Candlestick Pattern

How to Trade a Bullish Engulfing Candlestick pattern

When the bullish engulfing candlestick pattern appears, we expect a trend reversal from bearish to bullish. As mentioned, it signals the start of a bullish trend with buyers flocking to the market; or short-sellers closing their positions. And in this case, the objective is to go long.

While it can be tempting to open a long position once the bullish engulfing pattern forms, it’s prudent to check whether the asset has reached its support. From a technical perspective, this increases the probability that the price has bottomed out.

The upper wick of the engulfing candle should be the trigger for bullish entry. Since engulfing candlestick patterns work best in a trending market, you have two options for setting your profit target. You can put it around the previous resistance or base it on the prevailing market volatility. We recommend the latter, using the average true range (ATR) indicator. Your stop-loss target should be below the bullish engulfing candle.

How to Trade a Bearish Engulfing Candlestick pattern

When a bearish engulfing candlestick pattern forms, it signals a potential trend reversal from bullish to bearish. The pattern shows that bulls are getting exhausted, with sellers dominating the market, potentially pushing the price down. In this case, the objective is to short the market.

However, shorting the market immediately after the bearish engulfing pattern forms is not advisable. You should check whether the asset has reached its resistance. A pullback from the resistance increases the probability that the bullish trend has peaked. Here’s an example:

If the bearish engulfing candle had a long lower wick, your entry position should be below the wick. And you can set the stop loss above the candle. As for the profit target, you can set it around the immediate previous support level or base it on the prevailing market volatility. We recommend the latter, using the average true range (ATR) indicator.

Have You Heard about Silver Futures – Let’s Dive In

Silver has been considered a precious material since the dawn of time with its unique white hue and mesmerizing shine. Although no longer used as a medium of exchange for goods and services, it’s still praised for its high electrical and thermal conductivity, which makes it an indispensable material in the electronics industry. However, most Read More…

Sterling Futures (6B) double-top formation, what you need to know

Double-top formation is the most apparent technical indicator we are focusing on. RSI bearish divergence adds some strength to the potential double-bottom. Why expectations lead to disappointments in financial markets. Technical Analysis The daily chart on 6B is currently forming a double-top pattern. Price is still a way away from the neckline, but traders who Read More…

A powerful Dragonfly Doji was formed during yesterday’s volatile session. CL prices bounce off of the Parabolic curve mentioned last Friday. What to expect next? The Parabolic Curve Acts as a Support In yesterday’s volatile session, CL dropped over 6% right into the support zone and the parabolic curve we mentioned in Friday’s technical analysis. Read More…